Loch Lomond has produced their oldest single-malt whisky yet with the 54-Year-Old.

The 54-Year-Old whisky is one of Loch Lomond’s rarest whiskies with only 55 bottles produced and retailing at £24,000.

After an exquisite 54-year maturation journey, this whisky has emerged with unmistakable refinement and incredible depth of flavour. It began in a refill American oak hogshead before being re-casked into its final destination – a European sherry hogshead – creating layers upon layers of complex yet harmonious character.

You can see the video here: 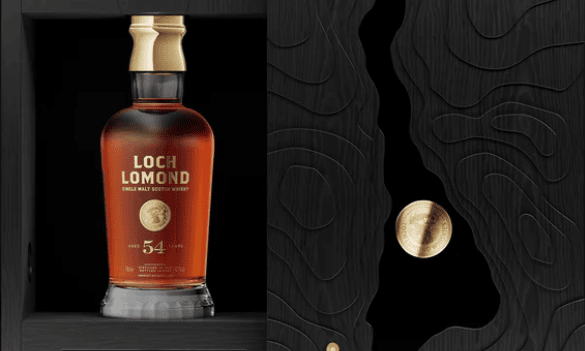 The bottle and housing have as much effort in the design as the whisky has in the taste. Handcrafted to perfection to represent the contours of Loch Lomond in striking black and inlaid with gold.

Glencairn Crystal produced 55 bottles in this limited edition. They used 30% lead crystal decanters inspired by the national park where the distillery is located. The heavy plinth-style design is decorated with a hand-cut design which has evolved from the Scottish award-winning glassware companies’ design of the 50-Year-Old Loch Lomond, released in 2017.

A single malt whisky worthy of its namesake, Loch Lomond 54 Year Old is presented in a majestic oak box handcrafted to resemble the contours around the famed loch.

Adorning this stand-out treat is an intricate metal stopper and collar displaying timeless engravings – featuring the distillation date, bottle number and cask number as well as their signature logo – all finished off with handmade satin gold colouring for extra sophistication.

The 54-Year-Old Single Malt is one that is historic to Loch Lomond.

Production began at the Loch Lomond distillery in 1966, one year later the single malt was distilled with unpeated malted barley and collected at high strength. Bottled at 42.1% ABV, non-chill-filtered and natural in colour the 54-Year-Old is as beautiful as it is flavourful.

The distillery at Loch Lomond has an uncertain past. As early as 1814 there was a distillery on the banks of Loch Lomond, but due to inconsistent paperwork at that time, there are no records of when, or why it closed.

Then in 1966, the Loch Lomond distillery was opened. This bottle could have not seen the light of day as in 1984 the distillery fell silent (closed) for 3 years. In 1987 malt production resumed following the purchase of the company by Alexander Bulloch and the Glen Catrine company.

Grain whisky production started in 1993, then in 1994, when the 54-Year-Old was re-casked, the grain distillery reopened. Subsequently, it was the only distillery in Scotland to produce both grain and malt whiskies.

Whisky distilleries have been producing whisky for centuries with many of the established whisky brands dating back over 200 years. Therefore, a few whisky brands have released aged limited edition whisky bottles, these include:

UKV International AG is a whisky broker that can help you source rare bottles of whisky.

In addition to this, UKV’s primary business is acquiring, supplying and selling bonded whisky to whisky enthusiasts or those seeking an investment opportunity.

We can help you find the perfect whisky cask to invest in and guarantee your whisky safely and securely whether you wish to invest to sell or consume your whisky.

Contact us today and we can start you on your whisky investment journey.

Peat in Whisky: Everything you need to know