You are here: Home1 / Distillation of Single Malt Whisky

After germination of the barley and fermentation, it is time to increase the alcohol content of the beer-like wash. Using the elaborate piping inside the distillery, the malted mix transfers from the washbacks to large copper stills, reminiscent of enormous kettles and a vital part of the whisky-making process. . .  read more below 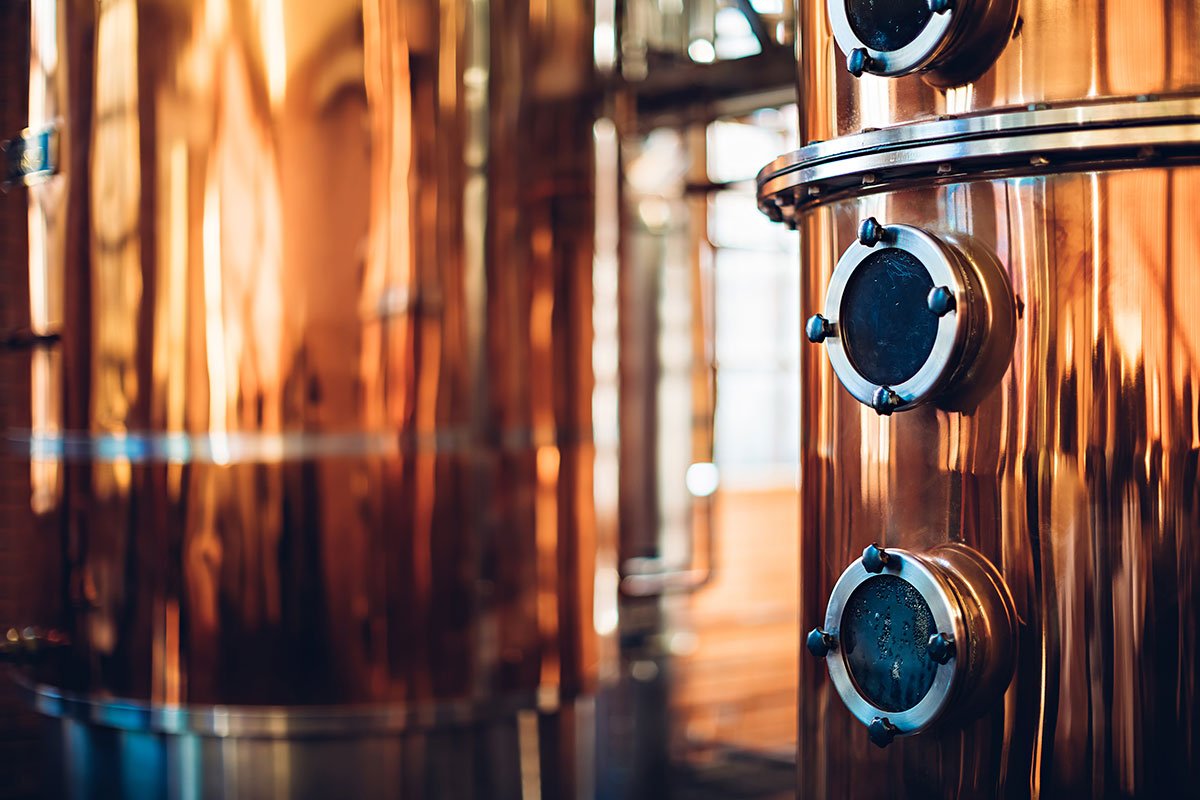 To heat and distil the wash, whisky stills use specially shaped tubes that lead hot steam through purpose-designed arrangements. This carefully engineered system generates an optimal heating effect without spoiling the properties of the wash. In due course, when it reaches approximately 78 degrees Celsius, the alcohol component begins to evaporate off.

Following the principles of physics, the vapour rises through the tapered tubes. After it passes over the neck of the still, it runs down the metallic line into a condenser where the steam liquefies. Here, the concentration is approximately 20 to 25 per cent alcohol by volume (ABV). At this stage, distillers term the product a low wine. It accumulates in a wine still, also called a spirit still.

Next, a repetition of the process yields an alcohol content of between 65 and 70 per cent. In most distilleries, this completes the distillation phase before the spirit matures in oak casks. However, although less common nowadays, a few producers still carry out a third run, yielding more substantial alcohol concentrations of 75 per cent or higher. These distilleries are mostly in the Scottish lowlands; they include Ailsa Bay, Auchentoshan, Bladnoch, Daftmill and Glenkinchie.

Notably, the finished malt liquor’s flavour and notes come from lighter esters, with other flavours carried on the wash. The more distilled the whisky, the less unique these remaining flavours will be; pure alcohol has little or no taste.

The shape of a vessel also influences the final taste of the finished liquor. Tall, slim vessels give rise to softer notes and purer alcohol such as Glenmorangie. In contrast, rounded or squat types tend to produce more intense and potent flavours like Lagavulin. This effect arises from the different amounts of fusel oils (higher alcohols) and accompanying substances that get into the new-make spirit.

Typically, wash stills have a capacity of between 20,000 and 30,000 litres. At the intermediate phase, the spirit or wine stills hold between 10,000 and 20,000 litres of low wine. Overall, distillation usually takes from four to eight hours.

Stillmen have a spirit safe which they use to sample and test the quality. Testing is by visual inspection, along with measurement of temperature, density and the ABV ratio. The mechanism uses hygrometers to test the new-make spirit and a system of valves and levers to return the liquid to the still. At this stage, experienced distillery staff can gain a reliable indication of the quality and whether the batch will be excellent, very good or merely satisfactory when it eventually matures.

On the final distilling iteration, the first thirty minutes or so of runnings are known as the foreshots or feints. In the past, producers discarded them due to their toxic methanol content. However, thanks to improvements in yeast quality and fermentation techniques over recent years, the methanol, propanol and isopropanol content of foreshots are either very low or zero. Instead, stillmen cut off the feints mainly to manage the flavour of the finished liquor.

As a result of the above, the high level of purity means most people do not suffer headaches after enjoying single malt scotch. Distillation continues until the residual alcohol content of the liquid (the spent lees) remaining in the spirit still drops to 1 per cent ABV or lower. That way, the producers keep losses of valuable alcohol and energy wastage to a minimum, too.

Finally, pot stills usually last for fifteen to twenty-five years, depending on usage. When their copper walls wear thin, to around four or five millimetres, the distillery has to replace them.